Regarding the poor innovation in the pharmacological management of pain, we show in this article, through two research stories, that the strategy of reverse translational research can be fruitful.

Pain is an universal symptom which can alter quality of life when it has a high intensity or when the symptom tends to become present for a long period of time, chronic pain becoming an illness. In this context, acute pain can benefit of usual analgesic drugs [paracetamol, morphine, non-steroidal anti-inflammatory drugs (NSAIDs)] and “non-specific” drugs are used for chronic pain like neuropathic pain (e.g. antidepressants, antiepileptics and lidocaine). However the benefit/risk ratio of usual analgesics is not optimal either due to a limited efficacy or to adverse effects and the efficacy of drugs used in neuropathic pain is also globally limited. Moreover some chronic pain syndromes, particularly dysfunctional pain syndromes (e.g. fibromyalgia, irritable bowel syndrome) and others are poorly improved by marketed analgesic drugs.

This demonstrates the crucial need of improvement in pharmacology of pain. However, though fundamental pathophysiological works were performed for several years giving a new light to the mechanism of pain, the innovation in the pharmacological management of pain failed. The currently prescribed analgesics are very old or old drugs and no conceptually novel analgesic drug has been marketed in the XXIth century!

In our research unit, we consider that the development of the reverse translational research, based on clinical observations to feed fundamental research, can make this research clinically more relevant and thus help to innovate. Several ways can be used to perform a reverse translational research. It can be a research based on the study of the mechanism of action or the understanding of adverse effects of usual analgesics like morphine or paracetamol. Fundamental research performed on these compounds, used in patients, might allow proposing novel relevant concepts and drugs.

Both analgesic and adverse effects of morphine and other opioids are linked to their agonist activity on mu receptors. In order to dissociate these two kinds of effect we identified an effector of mu receptors, working downstream from mu, the ionic channel TREK1. We showed that morphine activated TREK1 and that the deletion of its gene markedly reduced the analgesic effect of morphine and fentanyl without modifying morphine-induced constipation, respiratory depression or dependence, the usual adverse effects of opioids. Accordingly, we showed that direct activation of TREK1 induced analgesia without inducing constipation. These results suggest that it is possible to propose a novel concept of analgesics with a morphine-like analgesic effect and without the usual adverse effects of opioids. We are developing such compounds.

Paracetamol is the first analgesic used worldwide. However, its mechanism of action is not clearly identified. Considering that its clinical profile was different from that of NSAIDs, which suggested a different mechanism of action, we developed several studies to determine its specific mechanism of action. The obtained results led us to consider paracetamol as a centrally acting analgesic and a prodrug which needs two successive metabolisms, the first one in the liver to give para-aminophenol, the second one into the brain to give AM404 by coupling para-aminophenol with arachidonic acid thanks to the Fatty Acid Amino Hydrolase. AM404, the active metabolite, acts in specific brain area involving CB1 and TRPV1 receptors needed for the analgesic effect of systemically administered paracetamol. The activation of these receptors induces an activation of inhibitory bulbospinal serotonergic pathways acting on the dorsal horn of spinal cord to reduce noxious influx transmission. We showed this involvement of the serotonergic system both in animals and healthy volunteers. Beyond the better knowledge of this common analgesic, the analysis of the mechanism of action of paracetamol suggests that several centrally located targets could be used to develop novel analgesic compounds. 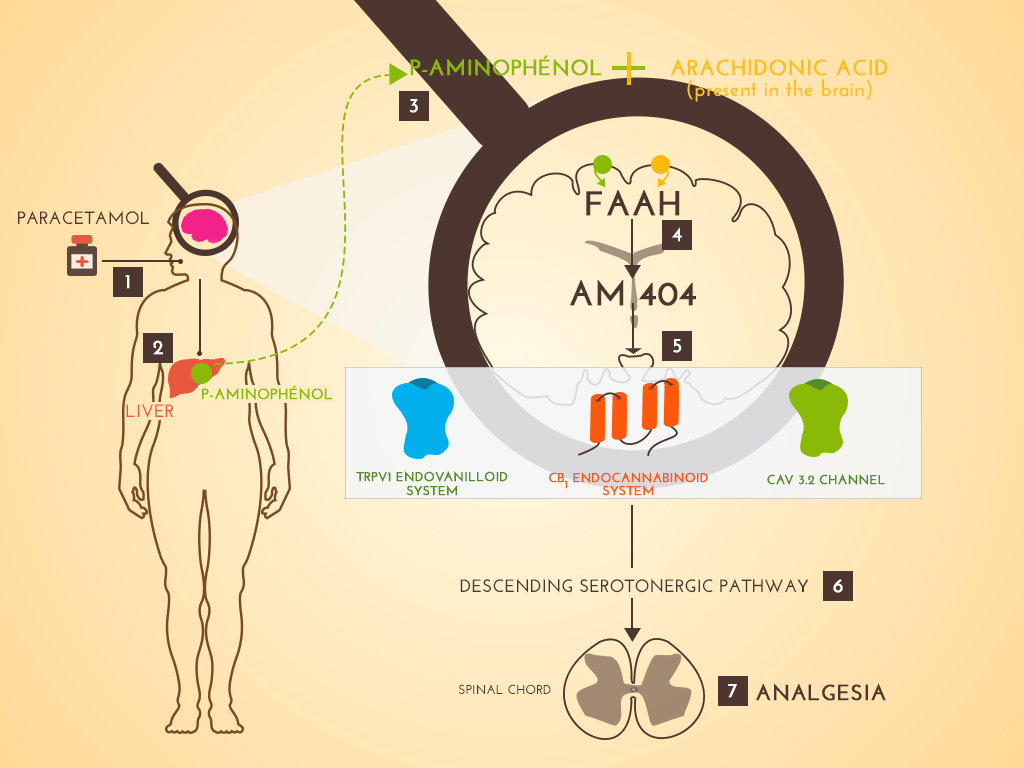 Due to the important need of innovation in analgesia we consider that the gap currently observed between fundamental research and pharmacological innovation could be reduced by a better application of the concept of reverse translational research, the painful patient becoming an important source of observations and ideas for fundamental research before coming back to patients to validate novel concepts of analgesic compounds. Improving our knowledge of currently used analgesics compounds is a good example of reverse translational research which can led to novel concepts as shown in the two stories succinctly described in this article.