Highlighting of the brain for healthcare enlightenment

Largescale interdiciplinary interactions between diverse scientific communities have nutured a powerful revolution that is ready to boost the field of Neuroscience Research. While the human brain is optimally equipped to visually extract multiplexed information from complex scenaries or images, several recent scientific breakthroughs have enabled the translation of neurophysiological secrets into intensity-based and color-based visual information. Today both fundamental research and applied studies in Neurosciences are ready to benefit from the massive societal investment that consisted in developing numerical images technologies (capture, processing, analysis, storage…) for the sake of improved knowledge and of improved healthcare.

The crosstalk and synergy between initially very segmented scienfitic fields such as marine biology, omics and genetics, reproduction/fertilization science have indeed enabled the engineering and creation of transgenic rodents whose cell populations of interest can be identified from the selective expression of fluorescent proteins of the marine kingdom. This phylogenic breakthrough has immediately been echoed and boosted by fascinating developments in the field of lasers and optical instrumentation that led to the establishment of two-photon microscopy (2P). 2P is to date the unique imaging technique allowing real time visualization of dynamic fluorescent cellular processes in situ in a living animal. Thereafter, intracellular electrophysiology and calcium sensitive organic fluorophores have been essential tools to promote 2P as a functional imaging modality suitable for the detection of neuronal activity especially in the finest dendritic compartments of living animals. This new possibility motivated molecular biology wizards to engineer genetically encoded analogs of earlier synthetic activity reporters. Finally high throughput directed evolution paradigms have widened the palette of available colors for the genetic labelling of cells, so that within a bit less than 20 years multicolour animal models can be established to specifically address the cellular diversity of the central nervous system, its functional complexity as well as its experience dependent plasticity.

Early partners of all these developments, IMAPATH team members have focussed their efforts in establishing intravital multispectral two-photon microscopy as a unique preclinical imaging modality to chronically assess the progression of central nervous system pathologies. Having established one model of spinal cord trauma (1-2), two models of cortical tumor (3-4) and one model of autoimmune demyelinating disease (5) compatible with the imaging technique, we have demonstrated that the optical properties of the pathological CNS tissue are still compatible with in depth cellular investigations. We have set up an exclusive methodology based on glass window implantation that ensures micrometric repositioning of the animal throughout imaging sessions, that allows standardisation of the acquisition parameters hence quantitative assessment of fluorescence intensities, and most of all that protects the integrity of the tissue by avoiding artefactual inflammatory reactions. For the first time it has become possible to reveal in the living animal the true mechanism of action of new therapies in specific subregions of the tumor (3), to evaluate the biodistribution and pharmacodynamic of therapeutic compounds (6), as well as to visualize in realtime the intrinsic ability of traumatized neurons to regenerate their axons through a crowd of accumulated inflammatory cells (1-2).

Live imaging of cell interactions in the normal (on the left) and diseased brain (on the right) where we see a focal accumulation of macrophages and monocytes inside a glioblastoma brain tumor (whose vascularisation is highlighted in red and collagenous matrix in blue).

Recently spotted as technique of the science of the future by the TV program FuturMag on Arte, hopes are big that it will for example help accomplishing the miracle of bringing paraplegic people back on their feet. Toward this achievement we are currently implementing the intravital optical monitoring of calcium transients in regenerating spinal axons. Not only this will allow identification of functional axonal sprouts but also it will allow evaluation of the functional outcome of physical interaction between inflammatory cells and individual axons in terms of axonal excitability and conductivity. 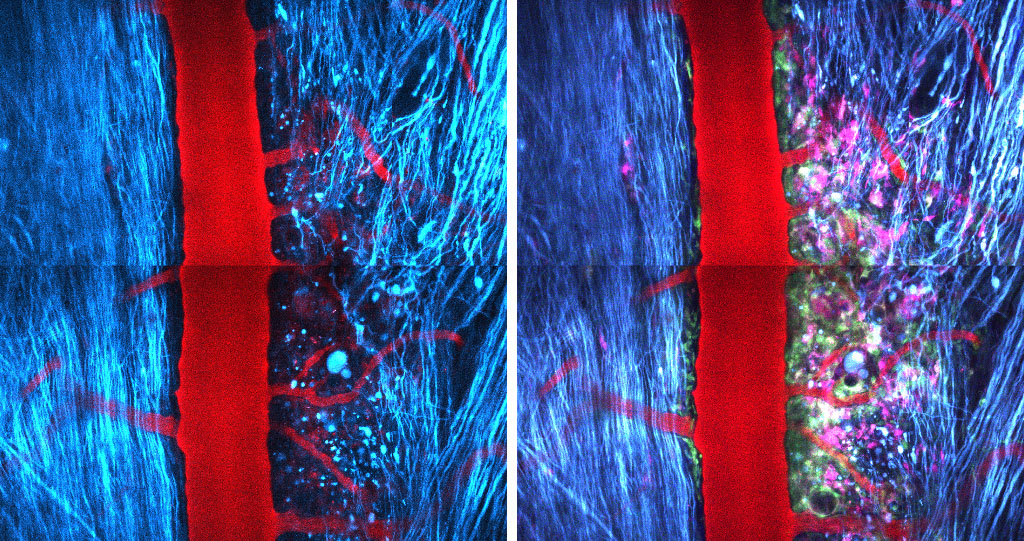 Whereas inflammation is acknowledged as a key component of most neurodegenerative diseases, we believe that dynamic and multidimensional analysis by 2P microscopy is the only way to address the complexity of neuroimmunity that can be both beneficial or detrimental depending on the phenotype and density distribution of inflammatory cells. Highlighting of the brain moreover provides real-time readout of the outcome of pharmacological manipulations targeting inflammatory populations. Therefore efficacy and selectivity of treatments can be assessed directly in the living subject using minimal amount of active drugs, limiting their application to relevant time windows and associating molecules into an optimal combinatorial treatment protocol.
A bit less of two decades of synergic interdisciplinary development have thus paved the way to the age of healthcare enlightenment… for our great delightment!